Some thoughts about Martian Manhunter #2 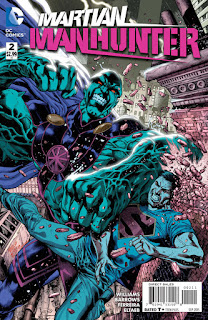 The martian threat continues to rise.

J'onn is still dealing with the revelation about how he was used by his own people to create war on Earth. However, things are about to get even worse once that he faces the Justice League by himself.

Yeaaah, this wasn't as good as I was expecting sadly.

The direction that Rob Williams is taking is certainly interesting one by making the whole nature of J'onn's arrival to Earth just an excuse to invade it. It also creates a nice conflict with the rest of the people of the planet including his own superhero colleagues as well as a creative use for his powers.

However, the execution can be a bit off. Just try to read a sentence without the author making the words he wants to remark in bold. Try I dare you!

The use of bold can be a pretty powerful tool to make the words someone wants to put emphasis on even stronger but it needs to be used in little quantities to not interrupt the flow of the read nor making it awkward, it's pretty much like someone was constantly yelling.

It doesn't help the fact that the author repeats words like "war" continually to get to the point and gets pretty heavyhanded at times.

Eddy Barrows continues in art duties and his work is incredibly strong by making great character expressions and action moments.

This premise has potential but it needs to be executed better.
Publicado por Comic Obsessed en 05:37